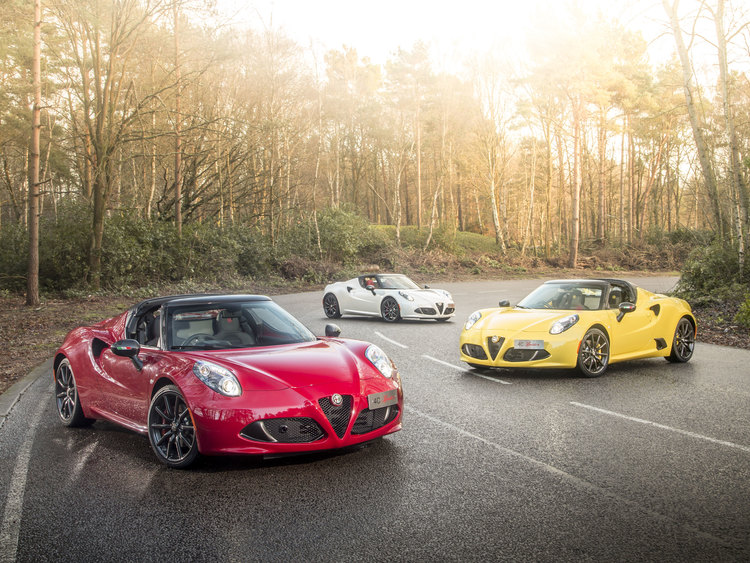 The Alfa Romeo 4C is no more, but it will be heading for classic status sooner than you think. With a few Limited Editions released during its short production run, the ’50th Anniversary’ seems an appropriate edition to cover. Despite a number of owners having a love-hate relationship with the 4C, it’s popularity will only increase over time.

This open-top only edition came about as an anniversary to mark the 50 years since the first ‘Spyder’ was released by Alfa Romeo in 1966. The Limited Edition being launched in January 2016 for an impressive £67,800. Loaded with Carbon fibre and small detail tricks, this was a fairly quick sell out for the 4C.

Another feature of this edition, it was only sold in the UK. It was only available in 3 colours Competizione Red, Madreperla White (Pearl effect) and Giallo Prototipo (yellow)

One of the instant things to spot is the unique flag on the mirrors. This was for the 50th edition only. However, a few of these have fell off by now! The real confirmation is of course the numbered badge on the inside centre console.

A lovely feature with any edition is having that something special, in this case it was the bespoke Caracalla Limited Edition leather travel bag that had been designed to fit the car. the stitching of the bag matched the colour of your car.

With this edition being a UK only feature I’m gathering the numbers to fit the colours….It’s thought 10 were made in Yellow, 15 in White and 25 in Red but let’s see how the numbers add up first before taking one person’s information. One car is still unregistered, believed to in dealer stock (or most likely with Alfa UK). The former Chris Variava Alfa Romeo dealer of Nottingham had sold 6 cars originally, but I’d believe it’s more double that amount… This is now loosely the same company trading as Auto100 and they have a constant stream of these editions and let’s be honest, possibly a safe bet if your looking for one.

Now the total number of cars aren’t all in the UK. One is in Hong Kong. There’s as many as 10 in Northern Ireland. And there is a white one in Cyprus, sold from the UK.

So up to now I have 26 cars of all colours, so need a little help. Let me know of your car and it can added to confirm this great limited edition future classic.

MORE TO COME ON THIS EDITION SOON… SIGN UP FOR UPDATES

Please get in touch if you have one of these editions!

If this has been helpful in some way, then please mention where you got the information with an ” According to http://www.howmanymade.co.uk ” – It would be Greatly Appreciated for all the time I research for the correct information – Regards, Mike.

This site uses Akismet to reduce spam. Learn how your comment data is processed.