The Abarth 695 Edizione Maserati has become one of the Rarest cars in the UK and in RHD form to emerge in the last few years. And not many people know about it.

The Abarth 695 Maserati Edizione was released to the public in the Pontevecchio Bordeaux colour at the Paris Motor Show in September 2012. Although it was officially presented in May at the Automotive Giro d’Italia. It was originally planned for a showing at Geneva Motor Show in the March of 2012, but it seems a delay or change of plan changed that at the last minute, possibly delayed to coincide with the Abarth Fuori Serie programme being released later in the year. Even the original name of ‘Tributo Maserati’ was changed to “Edizione’ before its official release. The Grigio Grey edition was shown a year later at the Frankfurt Motor Show in September 2013.

Here’s a Quote from the original Press release;

The highest customisation level – definitely “all inclusive” – is the world of Abarth Specialties. In Paris, it is represented by the 695 Edizione Maserati, a concentrate of sportiness, class, and performance produced by Abarth and Maserati. The world of Specialties is making its official début. This sector is the ultimate level of customisation combined with the exclusivity of a car built for and dedicated to every single customer. “Abarth Fuori Serie” is the new programme that represents the point of arrival of a path Abarth has been travelling in recent years with the aim of increasing the possibilities of choice and customisation for its customers more and more. This exclusive programme is where customisation starts from performance, consistent with the brand’s spirit. Only the “Fuori Serie” – special production – cars will have the 180 HP engine tuning and will feature the exclusive 695 brands. Exclusivity is also found in the production process since all the “Fuori Serie” cars will be developed, produced and type-approved at the Abarth “factory of victory”.

The Abarth 500 started the run of cars, this became the 595 and then with the introduction of the ‘Special Series’, they were given the moniker of ‘695’, meaning all the 695 cars were numbered Limited Editions.

One of the problems with a ‘ Limited Edition ‘ can be, it’s just a marketing trick to sell a few extra cars. But this wasn’t. It wasn’t a quick flash over of stickers and fancy extras, this was a real Limited & Special Edition with some interesting and unique features, starting with the colours, unique to this Abarth 695 Edition. Following on from the popular 695 Ferrari Edizione a year before, this was a showcase of what was possible from the new “Abarth Fuori Serie” by Abarth. 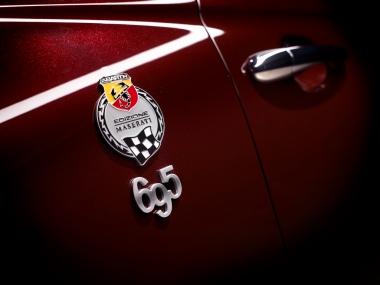 The Special features that were added, from unique badging to an upgraded gearbox this whole car was given the full treatment of tricks & treats. Unique floor mats, Special handbook supplement, Embossed 695 emblems for the headrests, Numbered plaque, Unique colour, Special Monza exhaust, Carbon style dash trimmings and so on… And of course, not forgetting an upgrade for the engine by Abarth/Maserati engineers to 180bhp, which is part of the “695” edition heritage, together with Brembo brakes

Fiat chose a bespoke Maserati colour called Pontevecchio Bordeaux. This colour from Maserati is achieved with special three-layer paintwork which reflects light and accentuates the shine of the colour. The electrically controlled soft top is made of a titanium grey fabric. Then adding the Stunning Maserati Trident Neptune Alloy Wheels from the GranTurismo GT and reduced to 17″ to accommodate the 695 arches.

Even the Monza performance exhaust tailpipes were changed to a hexagonal design – like the Maserati. Also standard were Xenon headlights with headlamp wash, plus spots & fog lamps.

On entry of the vehicle, strong chrome detailing of the door handles give a certain quality that repeats on the handles on the inside, then the sills are graced with carbon-fibre kick plates with ‘Abarth 695 Maserati Edizione’ graphics just to remind you where you are…  Inside the 695 Maserati Edizione, the seats were finished in a unique Sand Poltrona Frau leather, with a two-tone leather flat-base steering wheel, special design Jaeger LeCoultre instruments dials and aluminium foot pedals.

Additional unique features are the dashboard and gearbox trim, distinguished by a special matt-finish carbon lining, further enhanced with the 695 logos. Each edition also came with a unique indoor car cover with the ‘ 695 Edizione ‘ gracing it.

One of the sweetest additions was the bespoke luggage that came with the car, complete with Abarth tag. Stunning Soft Leather bags, made by legendary Italian luxury leather & luggage company ‘Tramontano‘ of Napoli – If you wanted to buy these separately, they retailed at over £600 each! This was a series of specialist luxury luggage sets, the two companies worked on for the Abarth 695 Fuori Series Editions, the 695 Ferrari Edition featured similar luggage set beforehand. Hardly any of the UK cars have their luggage when they come back on for sale used, most probably kept by the original owner and some never even made it to the car originally…!

The Abarth 695 Edizione Maserati’s touring credentials are enriched by the specified JBL car audio system custom-developed by HARMAN, with 6 speakers and an 8-channel amplifier supplying 400 W of total power.

OK, the ‘How Many Made’ numbers; 1 of 499 worldwide in Pontevecchio Bordeaux and an additional 50 cars in Grigio Record Grey. The initial release was in the Bordeaux colour then a second release in the Grey. A maximum of 20 vehicles was available for the UK in RHD with the Bordeaux finish.

Now, these are very rare in the UK. The official total number of registered cars ‘via’ the UK seems to be 17. Although it seems two or three of these may have gone or been for export, as three cars have different VIN numbers that don’t add up, so maybe just registered via the UK and sent to Asia/RHD countries. Also, a few of the cars came into the country registered as ‘Fiat 500’ –

There were a few that were distributed to Asia countries from the UK batch of cars, imported by private companies, but these may not have been registered in the UK. Rumours of some Initial cars being used within a couple of the UK Maserati dealers, as service vehicles are unconfirmed, this seems to have happened in the USA more though. One of the UK cars was also used within an exclusive hire car company in London, as a show car.

And with that of the Bordeaux edition, it’s thought only 15 UK Cars remained within the UK network. There are 2 RHD cars in Guernsey. 1 RHD in Jersey, although this car has now come to the UK. And then there are 7 UK cars in Grey. I have a total of 25 RHD believed ‘UK’ cars in the register, of both colours. (Still searching confirmation on the import & RHD export vehicle numbers though.. also a Grey one that’s a possible import). One of the issues with confirming the actual numbers is with the initial registering of the vehicles when they entered the UK. Some cars were simply classed as ‘Fiat’ and some as ‘Fiat 500’ – so these have blurred into the regular numbers, but tracking the cars down is what I try to do… so still searching.

All cars came with a numbered plaque below the centre console. These have 001 to 499 range for the Bordeaux edition and a plaque from 01 to 50 on the Grey edition. Although limited to 499 in the Bordeaux colour, it’s possible only 480 actually sold worldwide and just 49 cars in Grey.

There were 40 RHD for Australia. It’s known at least two of those have been written off.

There’s 6 RHD for Asia countries.  It seems there is just 1 RHD in Singapore, went via the UK and possibly used as a service car for Maserati. 3 RHD in Malaysia. There are 6 RHD in Thailand. In Japan, they were given 100 cars. from the 499 quotas, these were all LHD vehicles, although It’s possible 3 UK / RHD cars went there. It’s believed only two cars were sold in Denmark, both LHD. There is one in Cyprus, possibly a UK car, which is RHD.

As many as 40 RHD exist for the ‘RHD markets’, not including Australia., most of these came via the UK and distributed to RHD markets. There are 3 LHD cars in Turkey and 5 LHD in Israel. It seems there is now only one Grey one in Ireland, which is one that came from London, there were two but one which is an original ‘Irish’ car has now come to the south of England. In total around 250 Bordeaux Cars were destined for Europe in both LHD & RHD formats.

And so the search continues… Do you know of any? I’m also interested in RHD in other countries. Even interested in the numbers of any country. Let me know what you know. Any help would be much appreciated – thanks

Go to; http://www.instagram.com/abarth695maserati to view or register your car.

MORE COMING SOON! With the UK numbers and more details… This is being updated all the time…

If this has been helpful in some way, then please mention where you got the information with an ” According to http://www.howmanymade.co.uk ” – Would be Greatly Appreciated for all the time I do researching to get correct information – Regards, Mike.